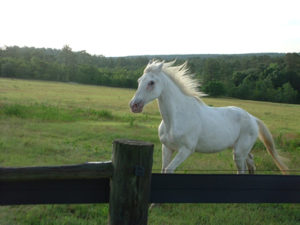 Once officially known as “Ta’Ca’Chance”, (thus the “TC” designation), Cotton lived to be almost 30 and was a part of our family since he was about 8. We didn’t do shows, “we” only knew a few tricks (OK, only one and it was nothing fancy) and we were only been in one parade (The Sanford,FL Christmas parade, pictured below).

It all started about 1984, I think. My daughter was still in high school then. One afternoon one of her friends who lived nearby called to tell her there was a white horse “loose in the field across the road”. The two of them got the idea they would “catch” him and simply bring him home. Armed with a warning about chasing the horse into traffic, off she went. I was sure all she would come back with was exercise. She came back with the white horse, secured by the dog leash she took along, hooked on a ratty red halter. It was early in the day, we bought another dog leash, and we all spent about an hour riding bareback around the yard with dog-leash reigns. Dinner for the horse was the front lawn, the yard fence would hold him for the night, or so we thought. We notified Animal Control and the Humane Society of our “find” and called it a night.

Cotton in the back yard pasture in Lake Mary, FL, around 1990

The next morning we got up early, looked out the front window: no horse. He had apparently managed to find a low spot in the fence and the escapee was out on his own again. After delivering my worried child to the bus stop, my wife and I cruised the nearby subdivisions in search of the “lost” horse…. armed only with a carrot and the two dog leashes. It wasn’t very easy to spot a white horse in the early morning fog, but we eventually found him. I climbed aboard bareback and rode him home…. to a chorus of neighborhood dogs, of course. After that we bought a bag of feed …and I fixed the fence.

As it turned out, the horse’s owner lived only a short distance away (across the road), but it took him almost three days to notice that his horse was missing and call Animal Control to get our number. We got the call and dutifully walked him “home”.

Back in what should have been comfortable “home turf” the easy-going horse exhibited a sudden personality change. The “pasture” was a sand lot and this horse was not at all happy to be back there at all. In addition, as his owner came closer this calm, the quiet horse turned to something else….. he jerked the lead rope from my hand and ran… The mild-mannered Mr. Hyde turned into Dr. Jeckle and took off like a 900 pound bullet .. not the sign of a good relationship between horse and owner. That was the first and only time I ever saw that horse act like that. I followed, quietly took a caqlm grip on the halter and walked him to the pasture and closed the gate.

And that was the end of this new-found friendship…. or so I thought.

From time to time, I would drive by to see the horse grazing on the lawn grass on Saturday mornings while the neighbor washed his car, or just staring into space from the sand-lot pasture. I never could figure out why he had a horse in the first place.

And then one day he wasn’t there.

I was not very experienced with horses, but I had grown up with them all around. The next door neighbors had several horses; Krystal Kimball, an older girl across the lake had a horse that had looked a lot like this one; and my childhood buddy, Rick Sickles and I rode double around the neighborhood a few times on his horse. I also seem to remember one summer hanging around a horse farm that was owned by a Mr. Layton. It was a few miles away, but easily reached on a bicycle. I rode that bike and then sat for hours just watching those beautiful Arabian horses, just grazing. I think I even got to help feed them a few times. I don’t really remember. It was a very long time ago.

On summer vacation with the family in the North Carolina mountains in my childhood, many years ago, I spent most of the time and all of my accumulated allowance at the Jack Prince riding stable. In high school, the art teacher asked me if I knew how to draw anything besides horses. I didn’t then, and I still don’t.

Suddenly all those Roy Rogers and My Friend Flicka shows started doing “instant replay” in my mind. He had only been around us a couple of days, but I MISSED that damn horse! Here I was, all grown up with a family and I’m feeling like some little kid with a lost puppy.

So, I got up the nerve to intrude on my fine neighbor once more:

“What happened? …did you sell him?”

And so the search was on.

I first commandeered my daughter’s ATV (the dangerous 3 wheel version of the time), grabbed a plastic bucket with a hand full of feed left over from the horse’s earlier visit, and headed off for the woods while my wife drove around the nearby roads. We searched and searched, and then we called the Animal Control and Humane Society. No lost white horse reported anywhere.

The search intensified….. but there was too much land to cover……

Then I had an idea…

My job at that time was at an avionics shop (airplane radios) that was located the old Marianna Airport. From people I bumped into there I had learned that an “introductory flying lesson” was actually less money than a “sight-seeing tour”, so I decided to sign up for my first (and only) “flying lesson”. We climbed aboard and we were soon up, up and way. Sky King would have been proud. I actually got to know Kirby Grant/Sky King a bit later in his life, and a few years before he passed away… but that’s a whole other story that can be found at Amazon.com.

With the pilot’s understanding cooperation, we started a kind of search pattern at the sand-lot pasture where the horse had been kept, and then circled wider and wider. About four miles out, we saw a small pen with a dirty gray horse in it; not a white horse, but something still looked familiar. Closer observation (and a warning from Doug Vickers at Sanford Air Traffic Control about low altitude flying in residential areas) and it turned out to be not a gray horse at all, but a dirty white one!  We had actually found the missing horse! End of first of a few flying lessons, beginning of another adventure!

As we left the airport and headed for the house we saw from the air I tried to figure out what had happened. Had they found him like we did and took him in? Why didn’t Animal Control or the Humane Society have any records of him being found? We never would get any real answers to those questions.

I knocked on the door.

(Them) “We just found him wandering on the road!”, they said, almost like they were somehow testifying in their own defense. I don’t believe they got around to notifying Animal Control, for example.

They had named him “Buddy” but they were starting to lose interest after the hay and feed expenses were added to a vet call for sand colic…. not to mention a nice new red nylon bridle, worth all of about $10.

I just mentioned weather….. Did I mention weather? I think I did. About a mile down the road, the rain started, and it wasn’t just a lazy-summer shower either, it was one of those “cats and dogs” things that Florida summers are famous for. It was a very long and wet ride home, something that would later turn into a common habit when I was riding Cotton for many years to come. No matter how blue the sky was when we headed out I usually managed to get caught in rain somewhere along the way. That’s the main reason I didn’t own any leather saddles – only weather-proof nylon.

After “parking” cotton at his new home in my front yard again, and a quick change into dry clothes, I returned to the “scene of the crime” to arrange a “pardon” for the “escapee” horse with the legal and rightful owner. After a brief discussion and about two hundred dollars, Cotton had found a new home.

However, it soon became clear that any thoughts my teenage daughter had about “her” new horse were soon history. Dad very quickly “took over” the “new” pet. And thus began a relationship that was to last for 20 years..

Through the years we managed to acquire a few other horses here and there, and we (my wife and I) once went on trail rides mostly, and did a little horse camping. We once rode with clubs like Triple B and Florida Trail Blazers, and even once with some friends with the Orlando Arabian club in the Sanford Christmas parade (photo above from about 1993), and we did the Withlacoochee Trail Ride a few times.

By the way, TC/Cotton was not really a white horse as he appeared to be at all. He was half Appaloosa and the spots showed clearly when he gets rained on or went for a swim in the lake.

So that’s the story of how I came to know my friend “Ta Ca Chance”, or “Cotton” – or just “TC” to me. All the other horses we collected over the years have found new homes, but TC was the only one left. He’s really the one responsible for inspiring the creation of FLAhorse.com and eventually the start of an Internet web hosting and design career.

There was a loud bang. Lightning had struck a pine tree in the far pasture of the horse farm next door. Unfortunately, my friend Cotton was standing under that tree. He’s now buried a short distance away from where he fell.

You never really forget your first horse, do you. Especially when that horse has been part of your life for more than 20 years.

Cody, the full Arab shown on the left above, was one of several horses we acquired through the years. (Horses should come with a warning label: “may lead to equine addiction”). We’ve also had two Quarter Horses (Cassidy and Bob) and a Paint (April), but TC was the first and he was also the last.